Tuesday kicked off with an unintentional two hour sleep in. Somehow during the night, my phone had decided that it had returned to Sydney and had adjusted its timezone accordingly. All well and good, except that we are very much still in New Zealand and had intended to be on the road by 9am. Never mind, our host was very gracious in not charging us extra money for checking out late and we sped off down the road to the Black Water Rafting Company HQ.

Once outfitted in a squishy wetsuit and squishy boots, it was kind of impossible to carry a camera around. So sadly, I haven’t got a whole lot of pictures from Waitomo Caves. Nonetheless, rafting through the pitch black water with glow-worms above for a couple of hours was an awesome experience. Lept backward off a couple of waterfalls, even!

Next stop was Rotorua, about 3 hours drive away. It’s definitely a scented town, though not overpoweringly so. We spent the late afternoon taking some photos of the various steaming pools and whatnot dotted around Kuirau park in town. Spicy Indian dinner, tasty followup icecream and a walk to the moonlit lake finished off one very full day.

In the morning, we grabbed brekky and then headed pretty much straight for Orakei Korako a rather impressive thermal area about halfway to Taupo. Orange thermal goo, boiling mud pools and gushing geysers. Pretty much the whole thermal thing in one place. I got some pretty pictures and video, the majority of which I’ll upload when I get back.

After Orakei Korako, we visited the Craters of the Moon, another thermal area which came into being when the authorities were messing around building geothermal power stations and whatnot, altering the groundwater and creating a new thermal tourist attraction somewhat by accident. The signs around the place tactfully avoided mentioning this fact. “Being that the Craters of the Moon is a fairly recent geothermal site, it has no particular Maori significance,” one of them read.

Huka Falls next stop, something like 160 cubic meters per second of water pouring through a gap about 10 meters wide with a 10 meter fall. Definitely something which was felt as much as seen. We finished up the day with a dip in Lake Taupo to cool off. I don’t think I’ve ever swum in fresh water which was so amazingly clean and clear.

We stayed in Tiki Lodge in Taupo last night, an oddly soulless place filled with bare walls and doors with passive-aggressive signs about not slamming them and not drinking. Curious.

Anyway, I’ll save today’s activities for a later post. Toodles! 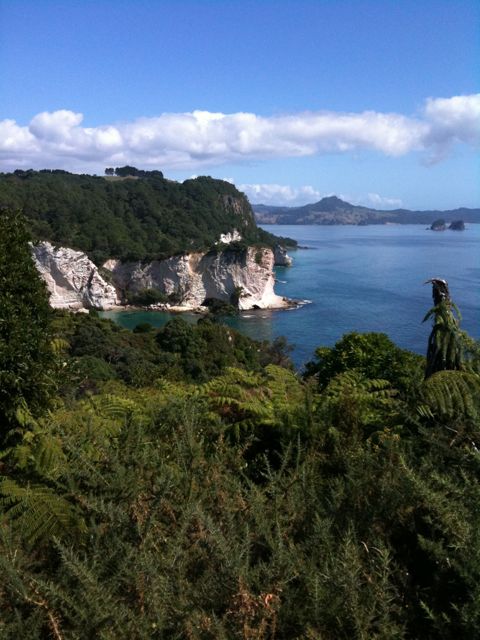 It’s a little bit hard to believe we only arrived in Auckland yesterday. What a day that was, though: quick SIM hunting in the city, delicious lunch at murderburger on the way out of town and then a two and a half hour drive to Whitianga.

Auckland seemed quite nice, we were both a bit regretful that we hadn’t planned to stay a night there. It remind me of Melbourne a little bit, with the wide streets and slight hilliness. I was most impressed to note that their little green walking men are animated. Nice.

Murderburger had been recommended to us by a whole bunch of people who’d eaten there while in Auckland. It was a little bit strange chasing down a tiny burger joint in a foreign land based on a few recommendations. Good food though, I must say.

But! Despite getting up at 5.30 and hopping off our flight around 6 hours later, we still had to make our way to the sleepy bayside town of Whitianga. Crashed out, got up in the morning and headed to Cathedral Cove. The photo up there on the right is along the walk which wasn’t too long. I’ve taken heaps of other photos but I’ll probably end up uploading them when we get back. I’ve got fairly scant internets to spare.

Lunch was damn good at a cafe in Hot Water Beach. Sadly the hot water spring phenomenon only happens within two hours of low tide, and low tide was at 7am and 7pm today. Just couldn’t fit it into the schedule. 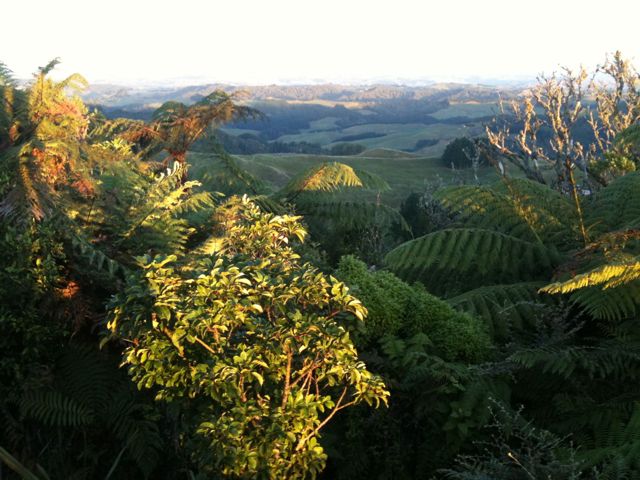 I’m sitting now in a little cabin nestled in the hills near Waitomo caves. The picture you can see there on the left is directly out the front door of this cabin. We arrived just as the sun was going down after something like three and a half hours on the road. Phew.

About two minutes walk down a little track from this cabin is a cave that I’m told is pretty much full of glow-worms. The last light of the day is just fading away behind the hills as I type so I reckon we’ll go down and check it out shortly. More in a few days! While my “One Week to Go!” post kind of shows the places we’re going in NZ,  it doesn’t really have dates. I thought it might be a good idea to post a list of dates for the places we’ll be heading to.

While we’re away, I’ll post some updates and photos and stuff here as we travel around, so stay tuned! We leave early Sunday morning for Auckland. The routes linked below are somewhat tentative in a few cases, but should give you some idea!

This afternoon was Reclaim the Lanes in Newtown. It kicked off around 2pm at The Hub and wandered through various laneway locations in the inner-west. Good music, great vibes, not too much rain and a whole bunch of wheelie-bin sound systems. I took a few photos – click on this one to get through to the album.

With just a week to go till we head off, I’m getting pretty excited about our New Zealand trip! Here, I took some pictures of places we’ll be going to off Google Earth. They’re in order of where we’re staying. Click for full size. Who’s watched the original Battlestar Galactica mini-series? Do you remember that kid who was in it, the one who thankfully wasn’t kept on as the show moved into a full television series? Yeah, the one on the right here. The actor’s name is Connor Widdows and there’s something curious and coincidental about the films and shows he has appeared in. It’s something to do with this piece of trivia on his IMDB page: “Son of Casting Director Kathleen Widdows”

That’s not quite it though, one needs to dig a little deeper there in his IMDB profile to get at the real nugget of wonder in his bio – oh here it is: “Nephew of Casting Director Coreen Mayrs”

I’m pleased to see that the trend looks set to continue with Connor’s younger sister Sarah. Thus far she’s been in The Butterfly Effect and an episode of The L Word but I’m not going to give you any prizes for guessing who was the casting director.

The wonderful nepotistic world of show-business! 🙂

(Full credit to Ing for noticing this curiosity)